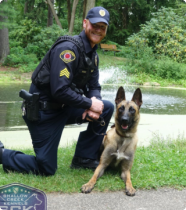 The Williamsport Bureau of Police K9 Corps was established in 1979 through the efforts of the city’s then Public Safety Director John McDermott and Officer Gary Mayers, who was the Bureau’s first K-9 Officer. Through a grant provided by the American Legion Post #1, a German shepherd named “Red” was purchased and both Officer Mayers and K9 Red were sent off for training.

Although this was the first "official" K9 partnership in the bureau’s history, records show that in 1921 there was an officer who did patrol the streets of Williamsport with a K-9 partner.  Officer Charles Clay used his German shepherd named “Beppo” to assist him with arrests while performing his normal duties.

Since the establishment of the Police K-9 Corps, the bureau has had seventeen police officer handlers with a total of twenty-two K-9 partners. From 2015 to 2019, this unit was deactivated.

In 2019, with a very generous donation from Ciocca Toyota, the Bureau reestablished a new K-9 Program, a program which is primarily funded by donations.  Our K-9 unit currently has two K-9 teams: Sgt. Brian McGee and his partner K9 Niko, and P.O. Tyson Minier and his partner K9 Tacoma. 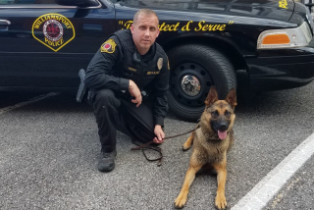 The City of Williamsport, Bureau of Police is currently accepting donations in support of this program.  People interested in making a donation should fill out the attached form HERE and send it in with their donation in the form of a check.  The Bureau would like to thank the many businesses and citizens who have been so generous over these past couple years and have made it possible for us to resurrect this important program.

DONATE TO THE K9 PROGRAM HERE